The garden, since antiquity, has always been a space for leisure and pleasure mixing a paradigm of dream and reality. Through this space, it was possible to travel in time, experience different sensations, promote encounters and get in touch with nature in its most exuberant expression.
According to Michael Corajaud, the garden is like a fragment of a dream and must be shared by each and every user, including those with some kind of disability – visual, hearing or physical. The elderly are also entitled, with their natural loss of mobility and decreased senses.

But, unfortunately, a large part of Brazilian gardens, both residential and public, do not serve this portion of society due to the lack of adequacy of their spaces. Most of the gardens are not adapted for people with disabilities and / or the elderly, including inadequate species in their spaces, not to mention constructive details such as recesses and unevenness that hinder the circulation of the disabled.

The idea of ​​creating a residential sensory garden, with very peculiar conditions, arose exactly to alleviate all this difficulty, in addition to providing this part of society with contact with nature in their own homes. The garden design can be adapted for balconies and even for the interior of the houses.

The sensory garden should be suspended at a predetermined height, considering the passage for both wheelchair users and the visually impaired and the elderly. This feature guarantees free access to everyone who wants to touch or care for species with ease.

The sensorial garden has a great oriental influence, manifesting itself through four senses of the human body:
• Touch, through the textures of plants,
• Hearing, with water fountains,
• Vision, through exuberant colors and, finally
• The smell with the aromas of the species. 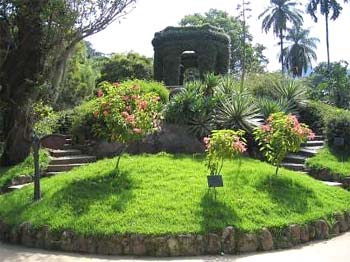 The species have different textures and through them it is possible to guarantee a satisfactory result, through touch. A good example of this is the case with succulents. A small cactus garden can have infinite textures and an excellent result, especially considering the visually impaired.

The small fountains and fountains of water are also responsible for pleasant sensations and can be inserted in any garden through a simple water pumping system similar to that used in aquariums. The sound emitted by the water is soothing and therapeutic according to holistic experts.

The lush colors of the flowers and foliage also guarantee excellent results with regard to the visual aspect of the garden. Their combinations can consider the most infinite color ranges. Petunias, cat tails, violets, peace lilies, geraniums, ixoras and plumbagos are among the most popular for small pots and planters. The polychromatic result can also vary according to the seasons.

And finally, sensory olfactory gardens – commonly known as aromatic or herbal gardens, of medieval influence – can also be used. In these gardens it is possible to feel the pleasant aroma of herbs and homemade spices, in addition to serving in the preparation of culinary recipes and spices in general. The most used species are rosemary, mint, basil, parsley, chives, ginger, coriander, as well as herbs that serve for ointments and teas, such as chamomile, fennel and lemon balm, among others.

According to experts, aromatic herbs have therapeutic effects, they enter through the sensitive cells that cover the nasal passages, reaching straight to the brain. In this way, these herbs affect emotions, acting on the limbic system that also controls the main functions of the body.

Below are listed some of the most important and well-known therapeutic herbs and their main characteristics:

The name has an Arabic linguistic origin, comes from the word “al ikilil”. Herb from the Mediterranean region, was highly appreciated for its aromatic and medicinal virtues. Legend has it that the Queen of Hungary, Elizabeth, who lived in the 13th century, cured her rheumatism and gout with water prepared by rosemary.

There are many varieties of mint, each with its own characteristics. The ancients said that knowing all varieties would be as difficult as knowing how to buy them in pharmacies. Its aromatic essence has a digestive and decongestant therapeutic effect.

Natural herbaceous from tropical Asia, Africa and some Pacific islands. Repels insects in vegetable gardens and gardens. Widely used in home medicine in the form of tea for relaxing and relieving nervous headaches. Also used by holistic therapists in aromatherapy, to treat several other symptoms.

It is the most used herb in the kitchen, as it garnishes salads, fish, vegetables and much more. All parts are used because they have the same aroma. Mythology tells that Hercules, the winner of the Numidian lion, was crowned with parsley leaves. A modest ornament for such a great hero, when others were crowned with laurel leaves. Parsley has therapeutic aromatic power for “cystitis”, and is found in supermarkets in bouquets, usually along with chives.

It is important to note that all the species mentioned above are perfectly adaptable to planting in planters, small beds or pots. When choosing species for sensory gardens, it is essential to avoid those that have thorns, such as rose bushes, some bromeliads and succulents. Some plants with toxic substances, such as thorn of Christ and me-nobody-can, among others, should also be avoided.

How about a garden inside the house?

Recently, hanging gardens began to appear in homes for the sake of sustainability and are currently widely used as a decorative element in homes.

This type of foliage differs from the traditional garden by the aesthetic factor, but the care must be the same. Those who comment on the subject are the professionals at Traço Final Arquitetura.

Despite being aesthetically beautiful and widely used as part of decoration, the hanging gardens are functional and help with ventilation. excessive use of air conditioning, resulting in energy savings.

Any house or apartment can have this type of garden. It brings a green look to the environment, which can be explored creatively. “In addition to more traditional elements, such as porcelain and plastic, the support pieces can be reusable materials such as pallets, fair boxes, pet bottles”, comments architect Fernanda Bittencourt.

Whether the garden is fixed to the wall or suspended by tensioned ropes, there are some precautions that must be taken with the garden indoors. “Regarding the support base, it is necessary to apply a waterproofing material to guarantee the material’s durability. And over plants, prefer succulent species. Despite the low maintenance, irrigation must be constant ”, explains the civil engineer, Elaine Baggio.

These are just three reasons for including this type of garden at home. It is worth remembering that it is very important to choose a well-ventilated and sunny environment to house the plants.

Do you know where to put your plants indoors?

It is from the windows that the main light comes from, responsible for the growth of the plants. But it is not anywhere that you can place them inside your home.

Each plant has its light requirement, from the minimum necessary to survive, to the ideal amount of light so that it reaches the maximum of its flowering or growth.

It is not enough just to bring the plants close to the window, thinking that this is enough for it to develop. North-facing windows show a lot of light variation during all seasons. In the winter, when the sun is lower, the light enters most of the day, as in the summer in only half of this time.

East-facing windows have better sunshine in the morning, but later in the day this facade becomes colder than a north or west facade.

In the west the sun becomes very hot in the summer and it is therefore not advisable to leave the plants exposed directly to that light.

Openings in the south façade have the worst light, including in the summer and therefore should be used exclusively by plants that must be grown in low light areas.

Insufficient light leaves the plants with weak, thin and pale branches, while excess light can cause burns on the leaves.

Remember that plants always grow towards the light source, so be sure to rotate your pots frequently so that the plants grow evenly.